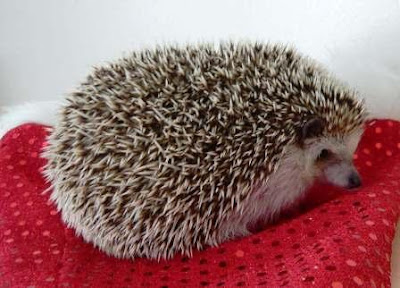 Peggy the Hedgehog is a rescue hedgie. This little hedgehog had been bounced through homes and been given up and given away a few times in her short life. After a rough start Peggy has found her forever home with me.
The first thing I did was wash her accessories and toys and clean her cage and give her fresh water and food. Afterwards I left her alone even though I was desperate to play with her. The best thing I did was leave her be for about a day and a half adjusting to the sounds and smells of her new home.
Slowly l introduced myself by holding her in my lap and patiently sitting quietly as she slowly uncurled. Initially she would take a half hour or more to uncurl. I discovered this was just her nerves at a new human holding her and touching her. She now uncurls relatively quickly unless I have woken her up from a nap. Then just like her human she is grouchy and unwilling to socialize for a bit. Tips for making friends with your new hedgehog: - Remember you look / smell / sound like a predator to this tiny creature and she will try and defend herself against you in the first weeks by balling up, huffing in air and possibly even biting. The tip to tell if you are about to be bitten is that she will lick you a few times first… as if to baste you before eating you. (Not the same as licking to anoint which will be discussed later).
-Give her a fresh start with a clean cage, toys and fresh food and water. - Leave her alone for the first day or two to adjust to her new environment. - Begin taking her out of the cage when it is quiet so that she isn’t startled by a sudden sound or the T.V. - When you pick her up do not use gloves because you want her to adjust to your smell and associate that smell with treats and play time. If you are afraid of the quills you need to toughen up or this is not the right pet for you. - Treats are a great bribe towards love. It’s awful but true. If you give her a few treats while holding her you will be associated with the treats in her mind and she will like you more. - After she uncurls hold her for a while unless she is struggling to run then put her in her play area and enjoy the show. Sit in the play area on the ground so that she can still smell you nearby and investigate you if she is feeling brave.
- Be gentle and patient and move slowly so that you do not startle her into a ball. Trust me, I thought Peggy hated me for the first few weeks because she was so reluctant to uncurl and play but it was just her adjusting to a new human and new living quarters. Your hedgie will reveal his or her personality and face to you if you are patient!
Posted by Ella

Your click will give food to a rescue animal. Its Free! xo Ella & Peg

About Ella and Peggy

Peggy the hedgehog is a sweet faced shy hedgehog who is slowly accepting me as her human.

All pictures are by me (Ella) unless otherwise credited.

All reviews are unsolicited and unpaid.

Have a hedgehog question? Email: hedgehogmanor at hotmail dot com and I will do my best to help!